Now that Internet giant Google has started telling it’s users to stop using IE6 to access GMail, you should to. The only time anyone should be supporting IE6 anymore is when they are working on an intranet app that will only be accessed by the poor souls forced by corporate policy to use it.

Microsoft even sent out an update last February that “auto-updated” users to IE7. But, not everyone has those turned on, or installs them once they are downloaded.

Reason #1 is simple. IE6 is a terrible browser. It couldn’t be any more non-compliant if it had set out to be. 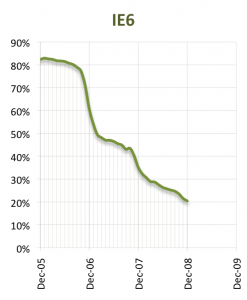 Reason #3: If you continue to support IE6, people will continue to use it, which is bad, see reason #1.

Reason #4: When someone like Google stops supporting a browser, it’s a watershed moment for that browser. I understand part of the reason Google is doing this is to push Chrome, but the fact remains that hundreds of millions of people will be nudged to abandon IE6.

Reason #5: The other choices are far superior. Even users that want/need to stay with IE can upgrade to 7 and be much better off. Just the tabs in IE7 will be a productivity boost for most users.

Reason #7: The IE Developers Toolbar is sub-par. Trying to debug and fix IE problems are too much of a hassle now. Once tools like Firebug became available for Firefox, who would ever develop in IE?

Reason #8: Security. IE6 has so many holes in it it is still the #1 target of script kiddies and real hackers.

IE6 is the Chevy Chase of browsers. At one point in the past, popular, everybody liked it and it did a good job. Now, it’s outdated, nobody likes it and it just can’t do the job any longer. It’s time for IE6 to retire.