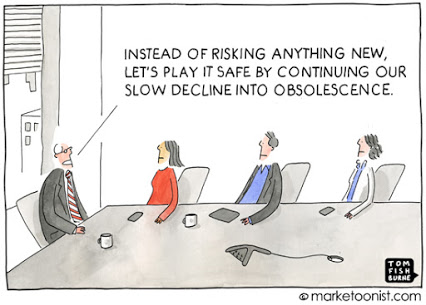 In the winter of 2008 I was on the verge of getting fired from my job as a web developer at McClatchy Digital. The entire newspaper industry had fallen through a hole in the floor and people were being laid off left and right.

Even though I was a low-level web developer, I could see the writing on the wall even if the brain-trust out at the corporate offices in Sacramento was still convinced everything would bounce back in a few months.

I decided to start getting out more in an attempt to build a network in preparation for the day the axe fell. My first step was to attend a very small local Meetup group run by Ashley Berman Hale organized around the concept of sharing SEO knowledge. I showed up to a small conference room with about 10 people talking about SEO and eating homemade baked goods.

Lesson 1: Be a good host

Within a couple of months Ashley convinced me to help her. Ashley was a great SEO, but I learned more about how to be a great host and organizer than SEO. Ashley was one of my early mentors in my move from invisible web developer to where I am today. Thanks Ashley!

When Ashley moved out to Colorado in 2011 she handed the reins over to me.

Most new attendees to the Meetup tend to leave as it’s wrapping up. The smart ones stay and make new connections. Half of the time, a bunch of us will go grab coffee or a beer after the event and talk about everything under the sun. Those friendships always have a positive ROI.

You are not the smartest person in the world. I remember talking to one of the attendees who had attended the Meetup one evening and he was talking about stuff so far over my head I though he was crazy. It turned out to be Michael Marshall, who tragically just died of a massive heart attack. Mike was a technical SEO genius, but he spoke to me as an equal, which only made me feel even more like a third grader. 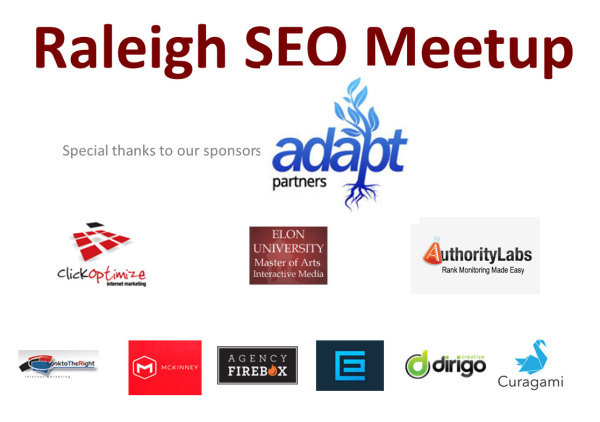 The SEO Meetup is billed every six months. While I was working at Media Two Interactive they sponsored the Meetup by paying those fees. When I moved on, I emailed the group to see if anyone else wanted to sponsor us. Much to my surprise about 5 companies were interested… lightbulb!

We now have multiple tiers of exposure for the companies that want to be associated with the SEO Meetup. For the past year Adapt Partners has been our Gold Level Sponsor.

The goal of the SEO Meetup has always been to preach the gospel of SEO. Teaching businesses and people the basics so they don’t get taken by a snake-oil salesman and also explaining to site owners what the future may hold for them in the ever shifting sands of the web.

When we could no longer fit our monthly crowd into the local venues, I had to bite the bullet and start paying for a conference space at NC State. We’re lucky that Authority Labs has been an on-going sponsor for half of the $500/month tab.

For about the last year we’ve been live streaming our events using Google Hangouts on Air. What started as an experiment is now a really interesting part of our strategy. Now we can ask experts from anywhere to present to the group without ever having to leave their office!

Lesson 5: If you make it easy, almost anyone will help

We’ve had two particularly spectacular sessions where people from far away presented. One was when AJ Kohn joined us from California and David Amerland joined from England to talk about structured data and the new connected web.

A few months earlier, Joe Hall and John Doherty spent two hour explaining in great detail exactly where Google is headed in the coming year. That’s major conference type of stuff, and these guys are giving it away for free – mostly because we’ve been able to make it so easy for them.

Free is a great business plan to attract a wide and diverse audience, but it also means people have nothing to lose by signing up then not showing. We use the 1/3 of people won’t show up rule of thumb and it’s been pretty accurate to this point.

We have been running this meetup once a month for the past 6 years. We may move the date a little bit, but people know that every single month there will be an SEO Meetup in Raleigh. Having that schedule makes it easy for people to recommend it to their friends.

The more you rely on tech, the more likely it is to fail. Even though we have been streaming the hangout every month for a year, we still struggle with it a bit before each session. That is one of the main reasons we love being at NC State, they have a tech support team that comes and always helps get us back on track quickly.

When Ashley first asked me to help her, I thought, “How hard can it be?”. It’s harder than you think. For the hangout part, Frank Jones has been a life saver.

You can’t control everything. Sometimes, no matter how much planning you’ve done, things beyond your control are going to happen. You can’t be a perfectionist and still get things done. Do the best you can, and then try to do your best again the following month.