When I first heard about Twitter (early 2008) it was in struggle with Plurk. In fact, I really liked Plurk and the quirky way that you scrolled sideways to see your friends updates. I eventually decided to choose Twitter as my social network of choice. I am a Twitter guy through and through. 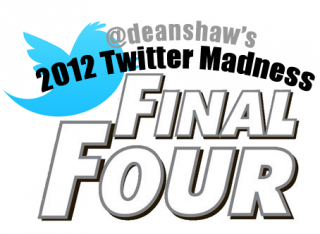 As of today I have shared 21,110 public tweets with the world. That works out to roughly 15 tweets a day for the past 4 years – yikes. Buy early this morning I finally got news that it was all worth it.

For some strange reason I was included as a participant in Dean Shaw’s 2012 Twitter Madness Tourney. I was both honored and worried I would be destroyed by the heavy hitters in my bracket.

In round 1 I was unsure and erratic, but somehow held on at the end to drop Chris Moody.

Round 2 had me up against Alec Sulkin. I’ve never met Alec so I was worried. I didn’t know his Twitter style. Maybe he was a southpaw! I followed his account in an attempt to garner some insights. Alec is funny and snarky – which is a deadly combination in a Twitter tourney. I knew I had to bring my A game. I was finally realizing that I would need to approach this as a marathon and not a sprint, and I won.

I will openly admit I felt like a wedding crasher in round 3. I was seated at a table with my friends at HubSpot who were all terribly good looking and wearing their ivy league sport coats. I distracted them with some magic tricks and convinced them that all the drunk bridesmaids were in the other room while I ran up the score. Although I  received a stern warning for not playing by the rules, I did dispatch my opponent. In a post game fog I can remember mumbling to someone from ESPN, “I’m just happy to be here. Hope I can help the ballclub.”

Now the tourney was getting serious. I was facing the perennial powerhouses of Twitter. I say on my cold metal folding chair watching The Onion stream onto the court and swish tweet after tweet. I felt like just making it to the “elite eight” was an honor… wait, no it isn’t – it’s hard work. I laced up my Chucks as tight as I could and used my ample girth to shove my opponent out of position. The Onion may have been a little over-confident and in the end I was booking my flight to the Final Four of @deanshaw’s 2012 Twitter Madness Tourney!

When CNN’s Wolf Blitzer asked me how it felt all I could say was, “I just want to give it my best shot, and the good Lord willing, things will work out.”

I can’t write any more now because Brent Musberger’s producer is tugging on my arm, but all I want you to know is that none of this would have possible without YOU! Thank you.